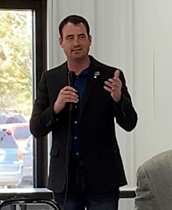 Leave it to Illinois to do the impossible.

Only in Illinois could a group of virtue-signaling politicians pass a bill believing they are single-handedly ending global climate change while simultaneously carting in wheelbarrows of cash for the political insiders, influence peddlers, and the crony corporatists that sustain much of their existence.

Politicians historically lacking in critical thinking skills embarking on a mission to save the planet seems like an impossible task, yet here we are living the dream in Illinois.

Except, as usual, this dream is an Illinois nightmare where the political class always get their perks and the rest of us have to pay for it. Unlike a sleeping teen in Nightmare on Elm Street, we can’t escape our tormenters by simply waking up. This is the reality we live every single day in Illinois.

This bill is much more than just rate increases, massive corporate bailouts, and absurd concessions to radical leftists, it is a microcosm of everything that is wrong in Illinois. In typical Illinois style, the “negotiations” were marked by backroom dealing where all the big money special interest groups got their cut and working families in Illinois were left with higher electric rates, reduced access to reliable energy, and lower wages.

There is probably no issue impacting more people than energy policy because we all consume energy to power our homes, our businesses, our churches, our schools, and our hospitals. It is vitally important to craft policies that will ensure the availability, affordability, and reliability of energy for Illinois citizens.

This bill undeniably will make energy less available, less affordable, and less reliable. But all of that is OK because the political elite can now mindlessly brag about saving the planet while simultaneously taking money out of the pockets of working families.

It’s this type of poor public policy that has been robbing opportunity from too many in this state for too long.

Perhaps, instead of ridiculing blue-collar areas of Illinois about alarming population loss, the majority party should be asking why it is happening in the first place. The reason Illinois continues to lose population is because bad policies like the energy bill get crammed through the General Assembly at the behest of special interests stripping away jobs and opportunities. The more Illinois becomes less competitive, the more high wage jobs will leave, forcing blue collar families out.

Next time you hear an Illinois Democrat or an Adam Kinzinger Republican talk about supporting working families – call them out. Look at their voting record. Look at how they voted on bills like this disaster of an energy bill. You can’t support working families while at the same time enacting policy after policy that ensures high wage, working class jobs will not be created in Illinois.

Make no mistake about it, this legislation is going to cost far more than the built-in bailouts and rate hikes. By arbitrarily closing perfectly functional coal-fired power plants and Peaker plants, we are creating a massive void in our available energy – a void that will have to be filled by importing energy from other sources. All the bill does is ensure that Illinois is no longer exporting energy and incentivizing other states to ramp up their “dirtier” production practices to fill the void.

Why are we propping up the workforces in other states and countries (like China) at the expense of our own?

And who do you think will have to bear the brunt of the added costs? You guessed it. All of us in downstate Illinois who get their electricity from the plants scheduled to be closed by 2035.

These plants are closing not because they are failing to supply the power we need, but simply because some radical leftists, like Governor Pritzker, need a political talking point. In the end, we will have done nothing to solve climate change, but we will put people – particularly southern Illinois residents – out of work.

Our state is blessed with natural resources. We should use them to craft a real all of the above policy on energy that prioritizes middle and working-class jobs, cheap and reliable energy, and a sustainable future for Illinois workers. Smart, strategic regulatory policy not only in our energy sector but across all sectors is essential to creating opportunity in Illinois. We must reject the false either or scenario at the center of this debate. We can be sensible about care for our environment while at the same time ensuring our citizens have access to affordable and reliable energy and our workers have access to high paying jobs.

If we wonder why Illinois is in the mess it is in today, it is because we are constantly presented with false choices and bad policies that exist for the benefit of political insiders. We should not be surprised influence peddlers were handed another victory, but we should be outraged by it and more importantly, motivated to change it.