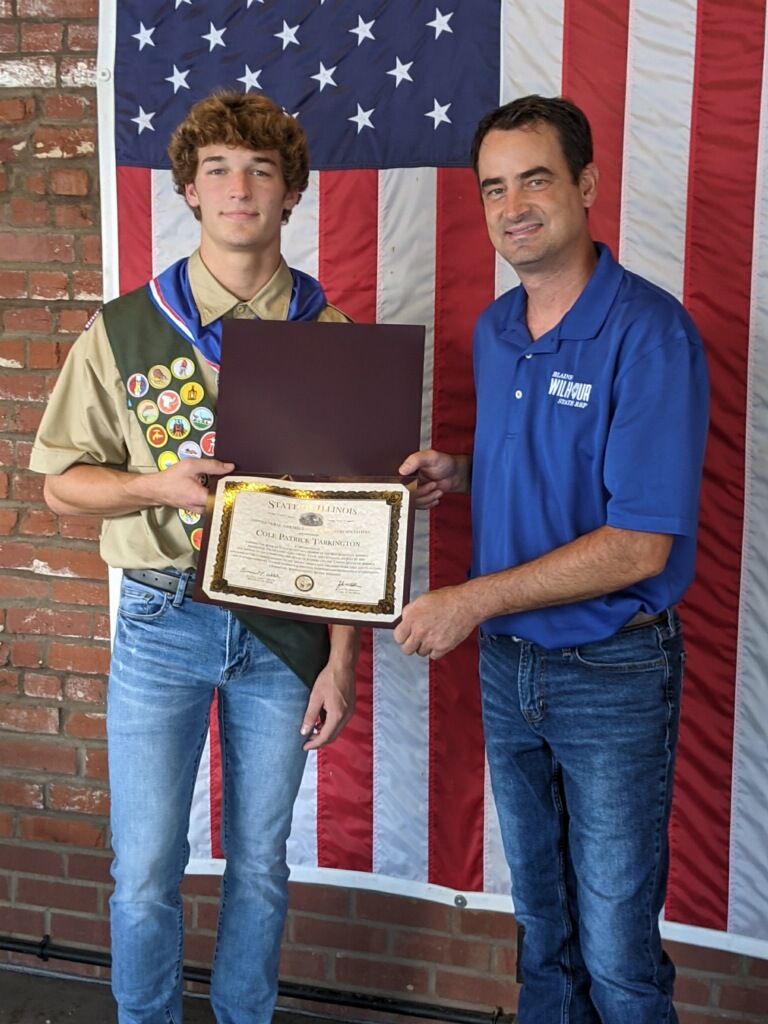 “To earn the rank of Eagle Scout, the highest advancement rank in Scouting, a Boy Scout must fulfill requirements in the areas of leadership, service, and outdoor skills,” commented Rep. Blaine Wilhour. “Congratulations to Cole Tarkington who joins the ranks of notable Eagle Scouts like Neil Armstrong, the first man on the moon, former President Gerald R. Ford, and Donald Rumsfeld, a former Illinois Congressman, White House Chief of Staff, Ambassador to NATO and twice the Secretary of Defense.”

In 2020, Cole Tarkington finalized his 6:35 Food Pantry Project as part of completing his Eagle Scout rank. The entirety of the project at 6:35 Pantry, located in Vandalia, took 189 hours to complete. It consisted of building, modifying and installing 16 shelving units that helped create an efficient distribution routine, expanded food-holding capacity, and provided lower angled shelves that enable food accessibility for those with physical challenges.

Cole’s project was fully supplied from donations of materials, tools, work sites and labor from local citizens. The project has opened doors to new connections with good people in his local community, and created a positive impact in his hometown by helping those who need it the most.

The Eagle Scout Award is a performance-based achievement that requires earning at least 21 merit badges and demonstrating Scout Spirit, leadership, and service. The requirements include an Eagle Scout Service Project where the Scout must further demonstrate service and leadership. More than 2.25 million Boy Scouts have earned the rank since 1912.

Cole is the son of Shannon and Jill Tarkington of Vandalia. He graduated from Mid-America Preparatory High School in Herrick, Illinois and is now a student at Southern Illinois University at Edwardsville.