Commentary: Illinois Republicans, this could be our moment 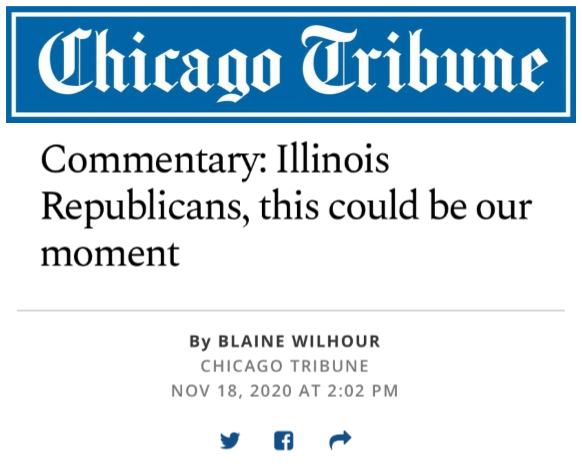 On Nov. 3, voters in Illinois resoundingly rejected the state constitutional amendment that would have allowed a progressive income tax. This was despite the massive public relations effort from Gov. J.B. Pritzker, who spent tens of millions of dollars telling everyone that only the rich would see a tax increase.

Voters were told to just trust the same politicians — the ones who have nearly bankrupted our state — with even more taxing authority. In the end, voters decided that the career politicians wrecking our state weren’t worthy of trust and they voted overwhelmingly against the proposed graduated-rate income tax.

Let’s be perfectly clear: The defeat of the progressive income tax is a repudiation of the entire political class. Voters in Illinois are tired of paying the price for reckless spending of career politicians of both parties.

The people of Illinois want fiscal sanity, real solutions tot he state’s economic issues and a vision for the future that gives hope to all “classes” of people. They are tired of the corruption, the influence peddling,, the pay-to-play climate in Springfield and the gross financial mismanagement. In short, the people of Illinois have no faith in the political class and they want real change.

The voters have spoken, but is anyone listening?

The Democratic leaders in Illinois seem only to listen to powerful special interests that pay big money to ensure there will be no action on any meaningful reforms. But what about the Republicans? Will my party pay attention to the message voters sent on Nov. 3?

Our party has a distinct opportunity to provide a real vision for the future of this state. We need a specific agenda for anti-corruption reform, pension reform, spending reform and tax reform. We need policies that are geared toward revitalizing both the urban and rural areas that too often are neglected and left behind.

Let’s show citizens that, not only do we understand the problems and have specific solutions, we understand how these problems affect their everyday lives. We all need to better understand how poor policy results in loss of value in our education system, our homes, our investments, our safety and our wages. Boldly, creatively and definitively we can deal with the long-standing structural imbalances that are driving our tax burdens through the roof and limiting our future opportunities.

No more of the endless blue-ribbon commissions. We need solutions, not commission reports that gather dust in desk drawers. The Republican Party can be the party that leads on those solutions our state so desperately needs. All that is required is bold leadership and a willingness to embrace what today’s Republican Party has become.

The Republican Party is no longer the country club party of our grandfathers but is now the party of working families. We need to take a stand for the issues affecting the middle class, starting with a recognition of the fact that in the eyes of voters the problems in Springfield cross party lines.

It is not just Democrats to blame for the financial crisis in Illinois. Both parties have a credibility gap. If Republicans want to lead the 2.7 million people who voted against the progressive income tax, they must present a clear vision for the future and stand up for ideas and policies that will resonate with middle-class voters.

Republican need to be more than just the anti-House Speaker Michael Madigan party. Republicans need to be the party of real solution and real ideas. The opportunity to lead is there. I suggest we take it.

Blaine Wilhour, a Republican from Beecher City, represents the 107th District in the Illinois House.