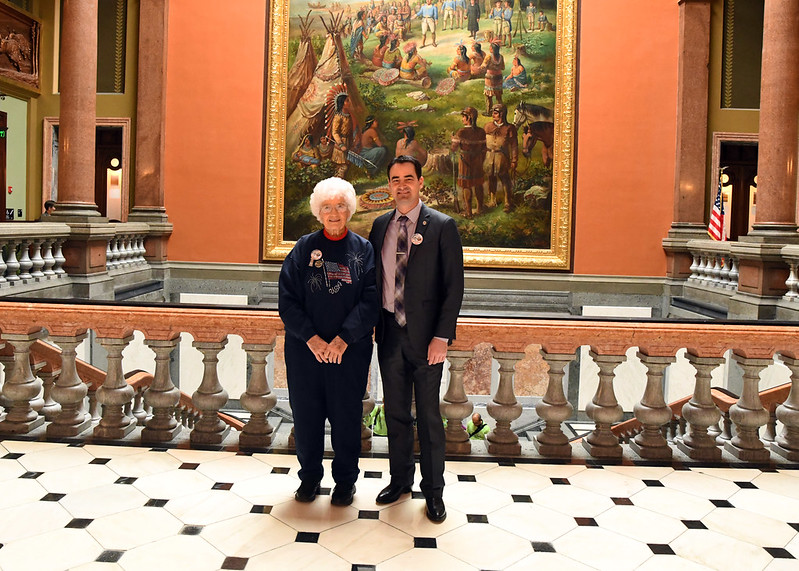 On Wednesday, Rep. Blaine Wilhour (R-Beecher City) rose on the House Floor to offer House Resolution 766 (full text of the resolution at ilga.gov) for consideration to honor Shirley Ann (Kramer) Hall for her 79 years of active, continual service with the American Legion Auxiliary. The resolution passed unanimously on a voice vote.

In the Speaker’s Gallery above, Shirley Hall listened as Rep. Wilhour talked about her patriotism and commitment to service to veterans, their families, and the community.

“Today we are here to recognize and honor a woman who is a role model for patriotism and community service…Shirley Ann (Kramer) Hall who is serving her 79th year of continuous, active membership in the American Legion Auxiliary.

Shirley has every membership card from every Auxiliary Unit she has been a member of and continues her service even today as the Historian of the Luther B. Easley Post 128 American Legion Auxiliary in Salem, Illinois.

Thank you to Department of Veterans Affairs Director and our former House colleague, Linda Chapa LaVia, for her help and support in honoring Shirley. Our research indicates that Shirley Hall is the longest serving American Legion Auxiliary member in Illinois history.

Shirley was accompanied by a number of special guests including:

*Roy Weber, the Illinois State Commander of the American Legion

Also joining the ceremony online through the internet, were Shirley’s family in Maine who were unable to make it in person today but are as proud as we are for the example she sets as a community volunteer.

In the spirit of Service, Not Self, the mission of the American Legion Auxiliary is to support The American Legion and to honor the sacrifice of those who serve by enhancing the lives of our veterans, military, and their families, both at home and abroad. For God and Country, they advocate for veterans, educate our citizens, mentor youth, and promote patriotism, good citizenship, peace and security.

Please join me in saying thank you and keep up the good work for our veterans and community to Shirley Ann (Kramer) Hall.”