Rep. Wilhour Warns Residents that Taxes and State Spending are Going Up! 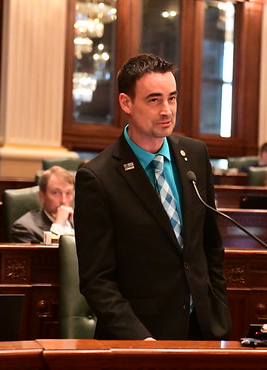 Rep. Blaine Wilhour during debate in the Illinois House.

State Representative Blaine Wilhour is warning area residents to brace for higher taxes and increased spending with the passage of the Fiscal Year 2020 budget.

Wilhour said, “The $40 billion budget approved over the weekend adds nearly $1 billion to the bloated budget Governor JB Pritzker proposed earlier this year. The budget also includes a Capital plan, which is being paid for by numerous tax increases including doubling the state’s motor fuel tax from 19 cents per gallon to 38 cents per gallon and increasing license plate renewals $50.

“We already have the highest combined state and local taxes in the nation and leaders in the House and Senate just raised taxes again,” Wilhour said. “Families in our region are going to be hurt by these tax increases especially the gas tax increase. This is a regressive tax that is going to be painful rural residents.”

Not included in the budget was a rejection of the automatic pay raise for legislators. It has become standard practice to include that rejection in the budget language, but not this year.

“There was no action taken on the state’s pension crisis,” Wilhour said. “There was nothing done to provide property tax relief and there was nothing done to stop the exodus of people from Illinois. But lawmakers get a raise. This is the wrong message to send to Illinois taxpayers. Illinois residents are being expected to bail out Springfield for the mismanagement of their money on the part of our state leaders and now they are being expected to foot the bill for pay increases for legislators. This is appalling and one of the many reasons I voted against the budget.”

“During a legislative session in which abortion was greatly expanded to include even late term abortions and the minimum wage was raised to $15 per hour – it was nice to finally get a win on an issue important to many in the 107th District,” Wilhour said. “The legislation is stalled for the moment and will likely be back, but for now this is a big win for 2nd Amendment supporters.”