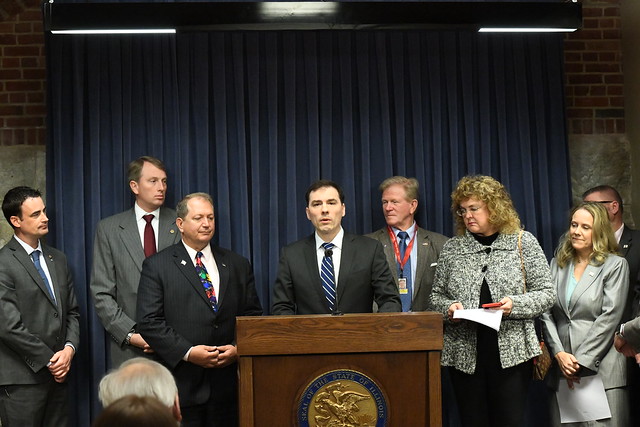 State Representative Blaine Wilhour (R-Beecher City) announced today he is co-sponsoring House Joint Resolution Constitutional Amendment (HJRCA) 34 to require a supermajority in the legislature to raise income taxes in Illinois. The amendment would require 2/3rds approval in each chamber in order for lawmakers to levy any future income tax increases.

“In Illinois, raising taxes has been the knee-jerk reaction to every tough fiscal issue to the point that we now have the highest combined state and local taxes in the nation.  Enough is enough,” declared Rep. Blaine Wilhour, a member of the Personnel & Pensions Committee. “We need to change the conversation from taxation to growth through structural reforms.  We need to limit the taxpayers exposure to the whims of the political class and this legislation is a step in the right direction.”

Representative Wilhour has been an outspoken opponent of Governor J.B. Pritzker’s push for a graduated income tax and seeks to protect Illinois residents from changing rates, which is not currently guaranteed in the Governor’s proposal.

The Democrats have proposed a tax schedule that purportedly increases taxes only on very high-income earners, but that schedule is not guaranteed to remain. While a supermajority is required to change our constitution to allow for a graduated tax structure, only a simple majority of lawmakers have to agree to expand the tax schedule later. Rep. Wilhour and other colleagues believe Democrats will simply expand the tax schedule later to include middle-income earners in order to hit their revenue targets for spending more. Nod